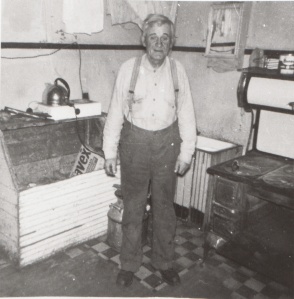 Stanley Smith’s house before the tornado 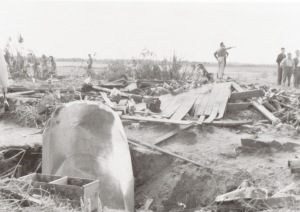 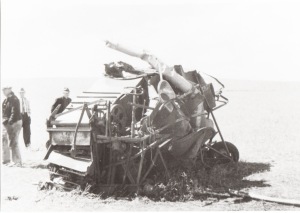 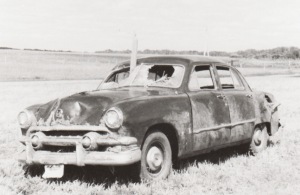 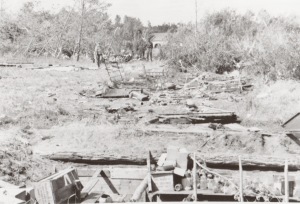 In 1963 near Spy Hill SK, Stanley Smith went to visit a neighbor and a tornado came, picked up the house and carried it into the air.  As the house turned in the wind, Stanley fell to the lower side, hit the open doorway, fell out and was killed.  Another fellow, by the name of Clarke, was in the house but he was not thrown out.  The cyclone dropped the house a quarter of a mile from its original foundation.

Clarke got out of the house unaided and went to a truck that had blown into the bushes.  The truck started and he drove to a neighbor for help.  Searchers found Stanley’s body in a field.

In a letter dated 6 September 1988 from Ruth Richardson at Spy Hill SK to Charlie Vance she mentions the tornado that killed her brother Stanley Smith.  Charlie had recently visited her.
Excerpt:
We could have told you of other homes where there is not much left, only the cellar.  Pet Gaberilson’s home was completely destroyed.  They never found very much afterwards of the contents of his house.  His home was two and a half  miles from where Bob Clarke lived.  Pet was not hurt we understand.  He took shelter in a thick scrubby part of a bluff and laid on the ground during the storm.  He heard trees breaking off all around and when he came out of the bushes he found he had no home, as his buildings were destroyed.  Art Scarrows home was badly twisted and one of his daughters had an eye injury and needed surgery.   Bob Clarke’s new big barn blew away and his machinery smashed.  The house fuel tank ended up in his cellar.  Nothing was left standing.  Gordon (Ruth’s son), was the first person there after the storm was over.

The picture of Stanley was taken in Bob Clarke’s kitchen a short time before Stanley was killed by the tornado.

I write pioneer stories from the Herb Lake Ghost Town in Manitoba. Please do not re-blog this material or re-publish without my permission.
View all posts by Linda C Butler →
This entry was posted in Smith Family and tagged Saskatchewan, Spy Hill, Stanley Smith, tornado. Bookmark the permalink.